Doctors make educated guesses every day. There’s precious little time to decide what treatment to use, much less how often or how much to prescribe, when there are dozens of patients waiting to be seen.That’s why they rely so much on clinical practice guidelines—statements that describe appropriate treatments based on scientific evidence and broad consensus among physicians. The development of treatment guidelines has been a function of professional societies such as the American Heart Association and the American Academy of Pediatrics for more than 20 years.

But as late as 1998…the FDA did not require drug developers to test new drugs on children, even drugs that would be commonly given to children.

The best guidelines are backed by evidence coming out of randomized clinical trials. In the case of new drugs, these trials are required. The Food and Drug Administration (FDA) will not approve the distribution of a new drug unless it has been tested in hundreds, if not thousands, of volunteers and deemed reasonably safe and effective. But as late as 1998, this rule applied only to adults: the FDA did not require drug developers to test new drugs on children, even drugs that would be commonly given to children.

The result is guesswork. Pediatrician Danny Benjamin’s 10-year-old son takes seven different medicines every day, many of which lack pediatric dosing and proper formulation. Without an age-appropriate formulation (such as a liquid or chew-tablet), Benjamin and other parents rely on rudimentary techniques to give the medicines. “Every day, I use a kitchen knife to cut up Jack’s pills—to give him a ‘ballpark’ dose,” said Benjamin. In addition to the problem related to formulation, the ‘ballpark dose’ assumes a linear relationship between the dose and the patient. It assumes that 10 mL of drug per kilogram of weight will work for a 1 kg baby the same way that it will work for a 10 kg child and a 100 kg adult. “Ballparks are great to communicate budget estimates, but not therapeutics,” Benjamin said.

In reality, normal growth and development in childhood result in often opposing, rarely predictable, effects on drug metabolism, explained Benjamin. The proportions of body weight made up of fat, protein, and water change dramatically in infancy and childhood. In a full-term newborn, for instance, water comprises approximately 70 to 80 percent of body weight. By five months, this decreases to 60 percent. Newborns have lower concentrations of albumin, a protein essential to the proper distribution of fluids between the tissues and blood vessels. They also have little muscle mass. Their body surface area is high relative to body mass. The absorptive surface of their small intestine is greater. Food moves through their digestive system faster. There are corresponding differences in the size of their kidneys and liver. “You just can’t think of children as miniature adults,” Benjamin said.

In 1998, the FDA began requiring drug developers to test specifically in children any of their medications that may be prescribed for children. The resulting trials confirmed that pediatric dosing recommendations are little more than guesstimates. Of the first 200 products tested, the “correct” dose was wrong 40 percent of the time. “We were either under-dosing or there was a dosing or safety surprise, like hostility, aggression, irritability, or insomnia. These may not seem like much unless you think through the consequences of an aggressive, hostile, over-medicated 5-year-old in the house with a 9-month-old younger sibling,” Benjamin said.

In September 2010, the National Institutes of Health moved to close another loophole: the lack of pediatric dosing information in generics—drugs that pharmaceutical companies have no exclusive right to market and thus are not required and have no incentive to test. It awarded a $95 million grant to a team led by Benjamin, professor of pediatrics at Duke University, pediatric director of the Duke Clinical Research Unit, and faculty associate director of the Duke Clinical Research Institute (DCRI), to run the Pediatric Trials Network (PTN) and conduct pediatric clinical trials for 16 generic drugs over the next five years.

“I hope we double that,” said Benjamin. His hope for 32 trials is not far-fetched. The PTN, which functions as an infrastructure for conducting safe and scientifically-rigorous trials, now has FDA approval to study four drugs. It is already recruiting participants for its first study drug: metronidazole, an antibiotic given to babies with necrotizing enterocolitis (NEC). Found in approximately 10 percent of newborns who weigh less than a kilogram, NEC can bore a hole in the intestines, allowing bacteria to leak out into the abdomen. Thousands of newborns receive metronidazole every year, but no one has studied what their bodies do to the drug.

“There’s a lot of variability among premature infants when it comes to drug metabolism. Even within the same gestational age and postnatal age, there’s typically a ten-fold difference,” said Benjamin. 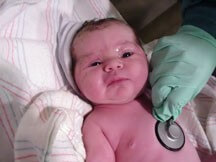 “If you give an ‘average’ dose to two neonates, each of whom delivered after 32 weeks in the womb [a normal pregnancy ranges from 38 to 42 weeks], and both seven days old, one is liable to have a trough level of 2ug/mL [micrograms per milliliter] and the other a trough level of 20 or 25ug/mL. Some babies will be fine, but babies who have low levels: they’re not getting enough antibiotic. This is a big problem when you have a fatal bloodstream infection that often goes to the brain.”

In a massive effort that Benjamin likens to “multiple mini-drug development programs,” the PTN will study product formulation, drug dose and safety, and device development. It will then use data collected from the trials to help inform pediatric drug labeling, and to provide regulators, pediatricians, and researchers with new information on how children respond to medication. The primary goal is to generate the data necessary to produce evidence-based clinical practice guidelines.

“Physicians don’t have a whole lot of time to scour the Web, do a literature search, and then think through pharmacology to maybe get the right dose. You have 80 patients that you have to see at the hospital that day and each one of them is on several different therapeutics,” said Benjamin. “Tack on ventilator management, micromanaging fluids, and talking to parents because seeing their child hospitalized is one of the most stressful things they can ever experience, and it’s a busy day. So physicians rely on treatment guidelines and reference materials. That’s why studying these drugs in children is very important. Either that or we continue to make things up.”