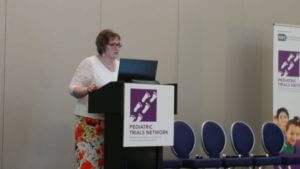 During a PTN-hosted symposium at the Pediatric Academic Societies (PAS) Annual Meeting on Sunday, April 28, Dr. Janice Sullivan of the University of Louisville School of Medicine discussed the successes and lessons learned from the IDeA States Pediatric Clinical Trials Network’s (ISPCTN) participation in the PTN POPS Study.

The ISPCTN is one component of ECHO (Environmental Influences on Child Health Outcomes), an NIH-funded initiative launched in 2016 to study the effects of early environmental exposures on child health and development. The ISPCTN’s 17 sites are tasked with conducting clinical trials with a focus on rural and underserved areas.

“[These sites] do not typically get a lot of federal dollars to support research, so there are a lot of unique needs in these areas,” Dr. Sullivan said. “It was challenging in those first months trying to figure out how to organize ourselves and move things forward.”

The PTN offered the opportunity for ISPCTN sites to participate in POPS (Pharmacokinetics of Understudied Drugs Administered to Children Per Standard of Care), a study designed to determine the safest and most effective doses of a variety of understudied drugs that are regularly prescribed to children.

The ISPCTN agreed to join the study in June 2017. It was a quick way to get involved in a low-risk clinical trial, Dr. Sullivan said, because patients were already receiving the drugs and blood samples were being collected as part of regular care. In addition, POPS was in line with the goals of ISPCTN and provided an opportunity for capacity building and mentorship.

“The PTN did an incredible job trying to prepare these sites,” Dr. Sullivan said. They provided each site with a study overview and detailed agenda for their qualification visits, toured the facilities and met staff at each site, and came prepared with a list of additional items to discuss.

Despite this preparation, there were still challenges. When the ISPCTN sites joined POPS, many of them had no experience negotiating contracts. Others required oversight of a tribal IRB, which required working through these specific needs. Many had to develop new policies for specimen storage, equipment maintenance, temperature monitoring, and dealing with different systems for electronic medical records.

After working to address these issues, Dr. Sullivan said, the sites got up to speed incredibly quickly. Fourteen sites have been activated to date and have enrolled a total of 139 patients. In addition, sites had to work internally to determine how to query their electronic medical record to identify potential subjects. Within a few months some sites were able to reduce their data query time from several hours to about 20 minutes.

Dr. Sullivan pointed to five common themes that determined success: getting sites enrolling, engaging new sites and investigators, building capacity, improving the network’s interaction with the IRB and regulatory agencies, and gaining buy-in and engagement from patients and the community.

Everyone has benefited from the partnership, she added, especially the children. The PTN has reached out to several ISPCTN sites to invite them to get involved in additional studies. “This will really help us be more sustainable and help us collaborate,” she said. “Sharing of ideas has helped everyone win.”